The story is based on five friends(Rohan, Arushi, Tanu, Ankita, Raj) who were study in the same college. Everyday at lunch there is a group meeting, each of them happy to share their personal experiences throughout the day. Sometimes on the weekned they were planning to visit somewhere to get enjoyed and refresh their mind. It was Friday 06-May-2011, they were planned to visit Manali which is around 537km from their source Delhi. Rohan and Arushi were so excited as even they were in the relationship. On the evening of Friday,Rohan and Arushi went for shopping spent few hours with each other and finally they get a call from Tanu "Come for dinner we are going to start our journey within 2 hours".

Tanu's parents were not so happy as they didn't like to do any journey during nights.Her parents call and told "Please try to understand don't go with them as you are my princess".Tanu replied "Thanks mom but I like you they are also my friends you don't need to worry".

It was around 10:00 pm they were started their journey from Karol Bagh, New Delhi. They were playing music inside the car and enjoy themselves. After 150km, they seen a man want lift as they all are getting shocked "Who is that man in the dark night?".Ankita said"Raj don't stop the car as I don't think that this man actually take a lift". Raj replied "Ankita there is someone who needs helps and if we do a little help then what will be the issue.Please try to understand this".

They came in front of the man and asked "What you need?".The man replied "After a few distance nothing is safe it is too dangerous".Rohan asked "What dangerous and how you came over here? Please come and get into the car".The man replied "But I don't want to go on this way please take some other way". Suddenly Raj feels irritate and say "If you don't want to go on this way then thanks take some other lift".Tanu replied "O God what is happening over here".They ignore that man and move forward. After a few distance they find one car with broken glasses. Tanu say "Don't wait and move forward". But Rohan and Raj came out from the car and move forward to that car with broken glasses. When they reach near to that car they find ladies bag and gents purse. When they open that purse they find the photo of that man who want lift within a hours back.

They all are getting scared and get into the car finally they move forward. Ankita and Tanu say "As we are telling the same thing there is something wrong but you guys didn't listen to us".Unfortunately they find a town and at the end of that town they find one dhaba. They stop their car and move towards the dhaba and asked that dhaba person "Whether this road is safe to travel or not as we find one broken car a hour back?". The dhaba person replied "Yes that was the incident around 2 years back there was a couple who are in a relationship who plan to visit Manali before 3 days of the marriage as his girlfriend forced her.
But that was very worst situation for them they died due to accident".

Rohan say "But how is this possible we meet this person about an hour ago". The dhaba man say "Yes you are right but that was his evil spirit who always try to take revenge when they found any relationship" .Tanu say "But we all are friends where is the relationship exists". Raj spoke "Yes there is presence of relationship Rohan and Arushi".

Finally they were planning to back home, they were started and move towards Delhi and everyone pray God to safe their life. Unfortunately they find something flying over their car with a black shadow. They all are getting scared that black shadow put a hole on the top of the car. Suddenly Tanu judge that black shadow were hole in that place where Rohan and Arushi seats.

After 10 minutes, they found the road has been blocked due to fall of trees. They came out from the car and find that man who wants lift along with his girlfriend. Suddenly they came in front of Rohan and Arushi and both were killed. Tanu, Ankita and Raj were run from that place and they find a lift to go back Delhi. But they still miss their friends and now all are getting married, they meet each other but that incident was unforgettable for them. 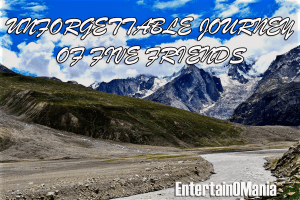 Unforgettable Journey Of Five Friends
The story is based on five friends(Rohan, Arushi, Tanu, Ankita, Raj) who were study in the same college. Everyday at
Read more.